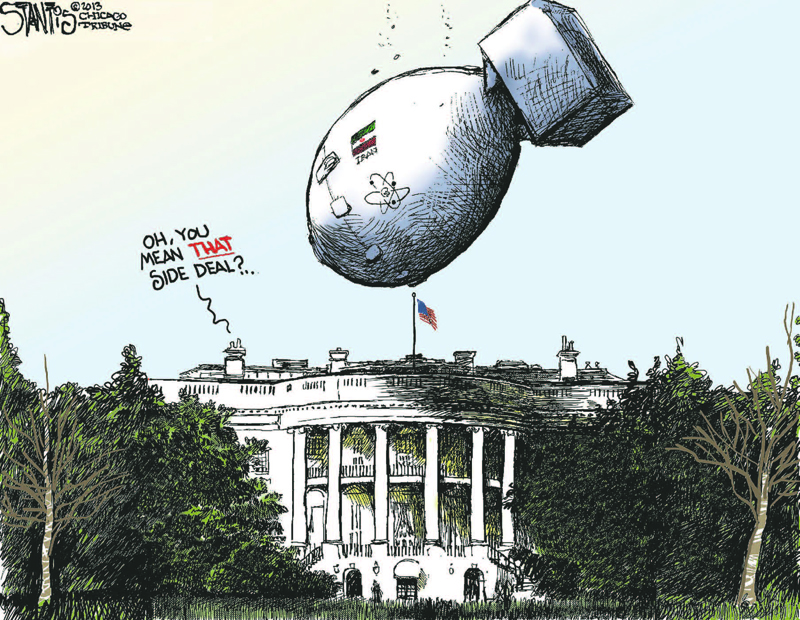 As the story goes, a person once observed an exchange between his friend and an acquaintance. The friend offered to buy the Brooklyn Bridge from the acquaintance for $40 million.

Bewildered, the observer approached his friend and asked what had just happened. Essentially, he pointed out, the friend did not have the money to pay, and the acquaintance did not own the bridge. Therefore, what was the purpose of the exchange?
The friend looked at him, totally astonished, and started waving the pen. “Don’t you understand what happened here?” he asked. “It was all about the pen. I got his pen!”

We have heard for many months that there are ongoing negotiations between numerous countries (the United States and its cohorts) and Iran regarding the specter of a nuclear Iran. Using a carrot-and-stick approach, discussions took place with respect to relaxing sanctions, and the world’s unwillingness to allow Iran to achieve nuclear capability, while clearly stating that all options are on the table in the event that Iran does not cooperate. The dialogue degenerated over time to an acceptance that Iran would achieve nuclear capability. With a mysterious disappearance of all options being open, the issue was somehow shifted from the inability to achieve nuclear capability, to issues of Iran’s ability to produce military-grade uranium. Over time, the talks further shifted from absolute inability to produce military-grade uranium to a question of how many centrifuges they would be allowed to operate. What many people did not understand was that the number of centrifuges was really a question of how much time it would take Iran to develop sufficient military-grade uranium if they decided to break whatever deal was agreed to.

The first problem is that the “center of gravity” of the negotiations has been constantly shifting in favor of Iran. The second problem is that even if an agreement was made with respect to the number of centrifuges, essentially we would be lifting economic sanctions. Iran would then have the ability to rebuild its economy, and thereafter would be free to do whatever it wants with respect to developing military-grade uranium. Let’s not forget that it is not a question of “if” they have nuclear capability, but how much notice the rest of the world might get.

However, even with these significantly diminished expectations on the part of the United States and its negotiators, an agreement cannot be reached. Once again, another postponement was suggested and will probably be instituted.

I am reminded of the story of the Brooklyn Bridge sale. It seems that Iran is just fighting for time. Time is the “pen.” The world thinks that the issue is sanctions and/or centrifuges, but it is all about borrowing more time. Viewed through that lens, it is clear that Iran has continuously and substantially outmaneuvered the United States and its cohorts in this negotiation.

The opinions expressed on this page are those of the individual authors and do not necessarily reflect the opinions of Hamodia.